Appropriate management of neck disease is crucial for optimizing patient outcomes and survival. *

In the hurly burly of major reconstructive surgery a neck dissection seems like the least of your worries but for some, these common surgical procedures can have long term consequences.

As with all cancers, removal of lymph nodes is often necessary to save our lives while surgeons try to minimise long term harm. Here is an image of the main groups of nodes in the body. 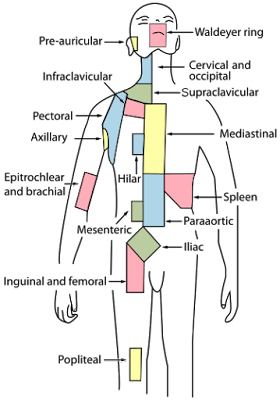 Our area of concern is the cervical lymph node area – “cervical” meaning “of the neck” in this part of the body.

When I had ovarian cancer surgery in 1996, the cancer had spread to the paraaortic nodes, two of which had grown to one centimetre in size and showed up on a CT scan. After these nodes were removed, I had terrible lymphoedema in my pelvis for several days. Eventually my body must have learnt to deal with the fluid because it didn’t happen again. (I think it was lymphoedema. It was a mighty build up of fluid and very sudden.)

According to Wikipedia, there are 800 lymph nodes in the body. 300 of them are in the neck. HPV related HNC often shows up in a neck node first having spread there from a barely detectable cancer in the throat.

The operation is carried out by making an incision in the neck and removing lymph nodes that are affected by cancer or might have microscopic cancer cells that can’t be seen in a scan (occult). This op is often combined with the surgery to remove the cancer from inside the head and neck and to insert the blood vessels for flap reconstruction.

There are different degrees of neck dissection according to how extensive the cancer is. The nodes are divided into sections as is seen below. A IIB neck dissection would mean removal of that section as seen on the diagram. 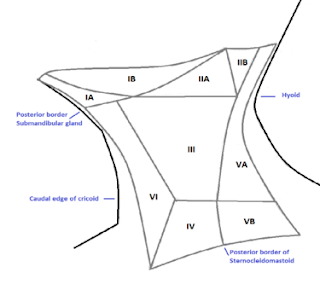 Here are the three main degrees of neck dissection. I think mine were selective.

Radical neck dissection. All the tissue on the side of the neck from the jawbone to the collarbone is removed. The muscle, nerve, salivary gland, and major blood vessel in this area are all removed.

Selective neck dissection. If cancer has not spread far, fewer lymph nodes have to be removed. The muscle, nerve, and blood vessel in the neck may also be saved.

Here are the structures in the neck which might be removed if the cancer is extensive. 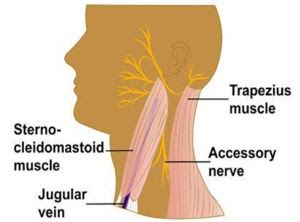 Note: There is a predictable pattern of spread from the tongue, the throat etc, so that surgeons can make an educated guess as to which nodes to remove. An extensive cancer might require a bilateral neck dissection with nodes removed from both sides of the neck.

Some patients have this information. They know how many nodes were removed. I have no idea. I have never seen mention of it in any of my notes although I have had two of these ops, one in 2009 and one in 2014. In the more recent one there was a lot of scar tissue from the previous op and my marginal mandibular nerve (a branch of the facial nerve) was severed accidentally meaning I have no feeling in my left lower lip. Those damn lymph nodes had no cancer in them anyway!

Below is a pic of the scars left by my two neck dissections. A 72-year-old neck so the scars are not all that visible because they are in the neck folds when I’m not stretching my neck up to take a photo. 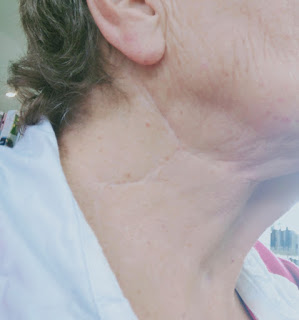 The lymph nodes themselves

The lymph nodes are part of the immune system and filter the lymph (fluid) that naturally leaks out of the blood vessels. They trap and fight germs and return the fluid to the blood supply, but they can store cancer for only so long. When they contain cancer cells, they can grow quite large before they allow the cancer to spread to other parts of the body. I like to think of them as a holding pen for the cancer if only one or two are affected although we would much prefer NOT to have lymph nodes affected.

Lymphoedema
When lymph nodes are removed there can be a disruption to the flow, so the “lymph” must find other routes. This can cause lymphoedema, a build-up of fluid which can be very uncomfortable for the patient and needs a physio or lymphoedema expert to deal with it. It seems to be reasonably rare in head and neck patients and more common in breast cancer patients from what I have seen. There is a need though for more acknowledgment of this problem in HNC patients and a better referral system to deal with it.

Chyle leak
A rare and temporary side effect is a chyle leak, which results in fluid accumulation in the neck from disruption of the thoracic duct (this problem is more common after left sided neck dissections). This will usually be dealt with in hospital although I see that one of our members went back to work with a drain in her neck to contain this leak.

Disruption to nerves.
In a radical or extended neck dissection the accessory nerve might be removed causing shoulder droop and weakness. It can be bruised in less radical dissections and the patient will need physio to regain function.  (I found that climbing my arm up the wall dealt with his problem successfully.)

The facial nerve can also be bruised leading to a crooked smile. In my case it was severed. These problems are rare.

There are lots of small nerves in the neck too which are cut, leading to a permanent numbness of the skin, in my case anyway. It’s not completely numb but it can itch and feel strange when I scratch it. Feels completely different from the other side of the neck.

Clips in neck
Some of us were surprised to find we had titanium clips in our neck. It's not in the medical notes or surgical report but it's usual to have them as they help connect structures in neck. Not a problem but we'd like to know.

Neck dissections are an essential part of many head and neck cancer treatments unless you have only chemo and radiation. Apart from my nerve problem which I attribute to having two big surgeries in the one area, my neck dissections have caused me no trouble. A couple of scars and a semi-numb neck seem a small price to pay for the sense of security the operation has given me. The cancer was very close to the nodes and it was good to know it hadn't spread.

Preparing for this post, I interviewed an Auckland surgeon by email. Here is what he wrote.

Do we all have clips in our neck?
Titanium surgical clips a routine part of all neck surgery. Every patient will have them.

Why do we all have different scars?
The surgeon will choose what they feel is the most appropriate incision for access to the disease/nodal levels relevant to that particular case. However, people have a range of neck anatomy so there is not one ideal place to put an incision. Differences in healing, adjuvant therapy, post-operative collections etc will influence healing.

Are many radical neck dissections are done these days?
The terminology has changed somewhat, the “radical” neck dissection is an outmoded term really. I do quite a lot of extended neck dissections incorporating resection of skin/spinal accessory nerve/sternocleidomastoid as dictated by disease.
Do you see a lot of lymphoedema?
All patients get some degree of lymphoedema, not usually problematic. Some will struggle more. There is poor access to lymphoedema therapists in the region, usually physiotherapy deals with it locally; I’ve not seen any lymphoedema information sheets – certainly seems an area of need, probably worth seeing if physiotherapy has any information they give out.
.
* https://www.enttoday.org/article/when-should-a-level-iib-neck-dissection-be-performed-in-treatment-of-head-and-neck-squamous-cell-carcinoma/

When we lose lots of teeth, jaw or part of the roof of our mouth during surgery, who we gonna call? The answer is usually the prosthodonti... 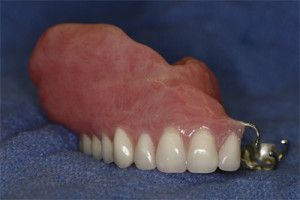